Once upon a time before diet books

Once upon a time before diet books 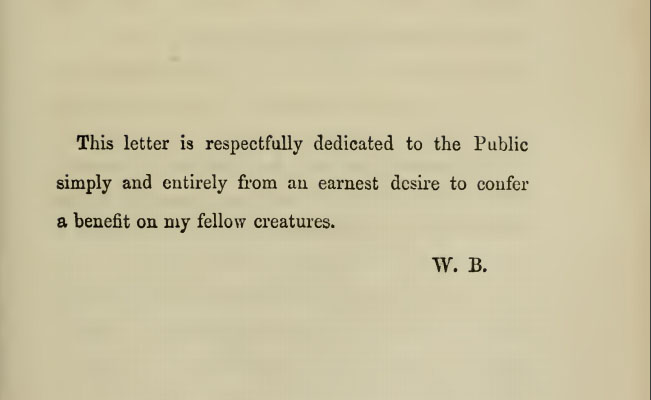 The remedy may be as old as the hills, as I have since been told, but its application is of very recent date; and it astonishes me that such a light should have remained so long unnoticed and hidden…

William Banting was a man who struggled with weight loss. He could not stoop to tie his shoes and walking up the stairs was difficult. When he tried some exercise in the form of rowing, he found that an enormous appetite, which he was compelled to indulge, came with it. He also tried sea air, horse riding, and potassium liquor. When Turkish vapor-baths became the fashion he adopted them thinking he’d found the philosopher’s stone. The results were poor. Everything he tried failed. One doctor assured him that increasing weight was an inevitable result of advancing years.

After many years of failed attempts to shift the weight, he came across Dr. William Harvey. He was treating diabetes with a sugar- and starch-free diet. The recipe was simple enough: abstain from bread, butter, milk, sugar, beer, and potatoes. It had never occurred to Banting that the carbohydrates that formed the staple of his diet could be fattening. When he stopped eating them the pounds started to fly off – he lost a pound a week for thirty-eight weeks straight.

The year was 1863, which proves that the low carb diet is not a new thing. It appeared in literature as early as 1825 in Brillat-Savarin’s The Physiology of Taste. He observed that carnivorous animals never grow fat, but that herbivores fatten as soon as they begin to feed on potatoes, grain or flour. He concluded that the chief cause of obesity was starchy substances.

As for Banting, he was so pleased with the diet he felt a sense of public duty to share his experience. The small booklet he wrote, Letter on corpulence, is considered our first diet book. The first two editions were printed at his expense and distributed for free. After this, it sold at cost price for sixpence a copy. It proved so popular that Banting and the expression “to bant” became synonymous with dieting. It remains in the Swedish language as a verb until this day. At the time of his death in 1878 Banting had sold 58 000 copies.

The original aim though was not to create a bestseller. Banting was hoping to affect the medical community and sent his booklet to his former doctors. The response was poor. While they didn’t dispute the diet, they considered it too great of the sacrifice of personal comfort to be generally advised.

This reminds me of how we treat diabetes today. Doctors prioritize a normal diet over normal blood sugar. When I asked my doctor for regular insulin, she asked me if it wouldn’t be inconvenient for me to have to inject twenty minutes before meals. I consider losing my feet or going blind from diabetic complications to be far more inconvenient than making changes to how I eat. Something tells me that Banting felt the same way. Life is sometimes a little bit inconvenient.